18,600 BTC have already been blocked in the Ethereum blockchain to secure tokens

Equivalent $ 180 million bitcoins are locked on the Ethereum blockchain – mostly in WBTC, sBTC and renBTC tokens. Of these, about 1000 BTC are blocked on the Lightning Network.

According to Dune Analytics , some $ 180 million worth of BTC is currently locked on the Ethereum blockchain. Mainly in Wrapped Bitcoin (WBTC) tokens, sBTC Synthetix and renBTC Ren Project – stablecoins fully backed by bitcoin.

As a reminder, 4,800 BTC were transferred to Ethereum in June . Moreover, the ERC-20 WBTC token accounted for about 75% of these operations.

“The industry has made significant efforts to connect BTC to the world of decentralized finance (DeFi), primarily through Ethereum,” said research firm Glassnode in its recent Q2 2020 report . “As of July 20, Ethereum has 15,800 BTC – 0.1% of all coins in circulation.”

Since then, the amount of Bitcoin blocked in Ethereum has grown to 18,600 BTC . 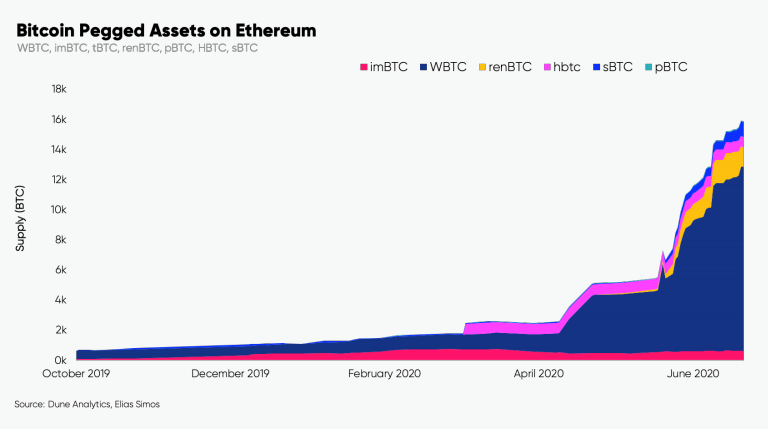 Since May, the number of BTC blocked in Ethereum via WBTC has increased more than 12 times. This is partly driven by the growth of the DeFi industry and the willingness of users to get involved with their bitcoins.

After WBTC, the second most popular BTC blocking scheme is sBTC Synthetix, which accounts for about 7.5% of BTC blocked in Ethereum. It is followed by renBTC with approximately 6% BTC. The rest of the bitcoins are locked in HBTC Huobi and imBTC imToken.

State Bank of India has tied up with JPMorgan to use the US bank’s blockchain technology to speed up overseas transactions.